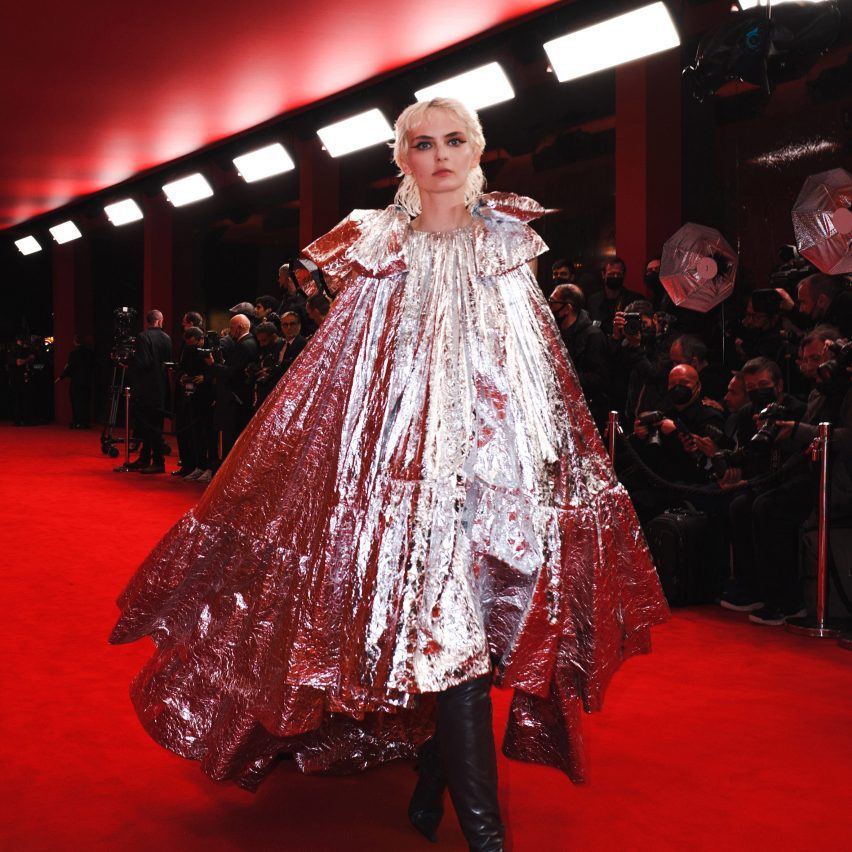 Balenciaga hosted the film premiere-style red carpet event at the Théâtre du Châtelet in Paris on Saturday 2 October to mark the return of physical runway shows and reveal its Spring Summer collection.

A tented space with a bright-red carpet and paparazzi press pit was built outside the theatre, which led into the auditorium where the Simpsons film was premiered.

Prior to the red carpet event, regular guests, including fashion press and buyers, were seated inside the theatre, where they watched a live stream of the celebrity invitees arriving.

Alongside the celebrity invitees, a mixture of models and friends of the fashion brand walked the carpet and posed for pictures dressed in the brand's Spring Summer 2022 collection.

Only once they were ushered into their seats inside the theatre did the high-profile celebrity guests realise that their trip down the carpet was the brand's official runway show.

"I've wanted to do a premiere concept where the guests would be the show for many seasons," said Balenciaga creative director, Demna Gvasalia in a recent interview with Vogue.

"It was nice to have a social occasion again. I hoped it would make people smile."

After the red carpet concluded, the audience was seated for the premiere of a Balenciaga-themed mini-episode of The Simpsons.

The short film told the story of Homer Simpson contacting Balenciaga to request the fashion house send a branded item or "piece of cloth with a tag" to celebrate his "fashion-deprived" wife, Marge Simpson's birthday.

Balenciaga employees were animated in the short film, wearing full past-season Balenciaga clothing. Creative director Gvasalia was also featured and visited Springfield to fly residents of the fictional city to Paris for a fashion show.

Characters from The Simpsons appeared in an animated runway show wearing some of Balenciaga's most iconic looks. Twins Sherri and Terri were dressed in identical black hourglass gowns that were the finale looks from Balenciaga's Spring Summer 2020 show.

The animated show's audience was filled with Simpsons-style caricatures of celebrities, including cameo's from singers Kanye West and Justin Bieber.

The Spring Summer 2022 show aimed to challenge the typical conventions of fashion shows.

The brand's most recent physical runway prior to the coronavirus pandemic for Autumn Winter 2020 explored themes related to climate change and featured an apocalyptic, flooded venue.

The Simpsons collaboration marks one of Balenciaga's many recent pop-culture partnerships which also include marvel superhero The Hulk and drag queen RuPaul.

In September, the fashion brand collaborated with Fortnite to release a collection of in-game Balenciaga skins and physical garments with Fortnite branding.

Photography is by German Larkin. Images are courtesy of Balenciaga.