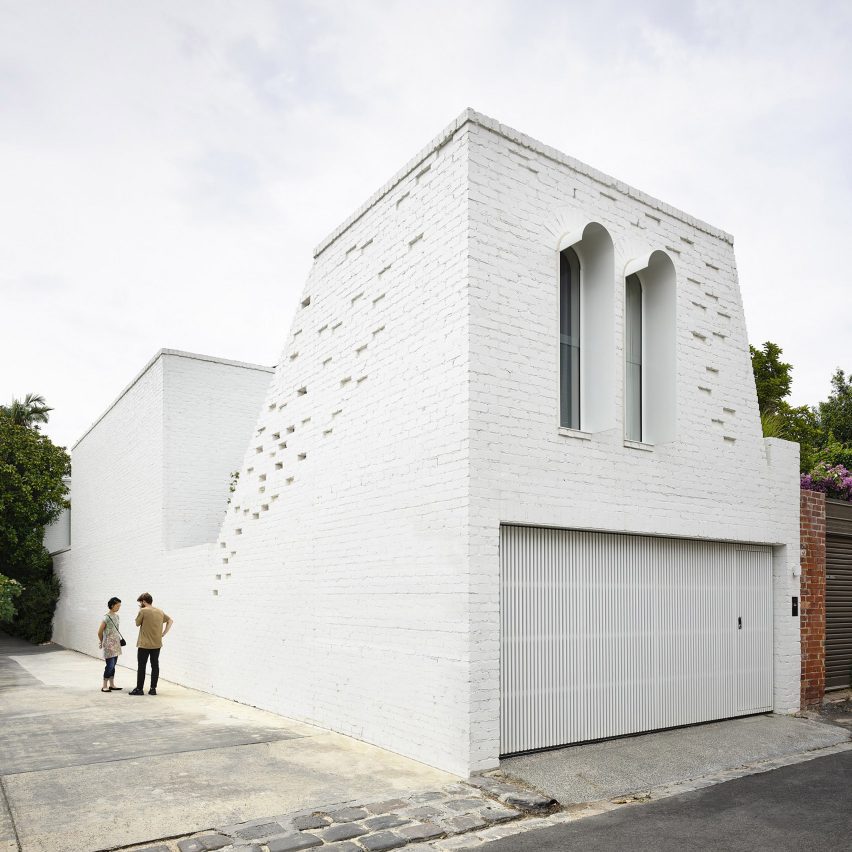 Australian practice Matt Gibson Architecture + Design has restored and extended a historic home in the suburbs of Melbourne, which has been shortlisted in the residential rebirth category of Dezeen Awards 2021.

Located in the South Fitzroy Heritage Precinct, the home's historic Victorian frontage was retained, while its rear has been completely transformed. The local practice split it into three pavilions separated by planted courtyards and linked by a glazed bridge.

"As opposed to providing a newly-attached, contrasting addition (an oft supported heritage approach), the resultant conversion is instead set out as a series of separate, similar mews-like outbuildings separated by courtyards," explained Matt Gibson Architecture + Design.

The historic front of Fitzroy Bridge House has been preserved and restored to contain living and dining rooms, which connect across a large courtyard to a kitchen and a family room via a glazed corridor.

Above, these two blocks house bedrooms and bathrooms, linked by a bridge that crosses above the courtyard. A thin, low strip of glass provides views out while minimising the risk of overheating due to its southern orientation.

At the western end of the home, a third, more independent block sits at the other side of a second courtyard. This houses a garage and studio at ground-floor level, and a study that can be converted into an additional bedroom above.

These new pavilion-style structures were built using bricks recovered from the original home, which have been painted white throughout and are contrasted by black metal window frames in the courtyard's walkway.

The white bricks define the building's street-facing northern elevation, with the rising and lowering of the wall expressing the home's blocks and courtyards.

For the rear facade, the black-painted heritage frontage is contrasted by the recovered white brickwork, with thin arched windows and a large, slatted wooden door to the garage

"When seen from the public realm of Little Napier Street the three buildings are viewed in combination, unified by their material lustre, colour and solidity," said the practice.

The interiors combine new finishes with those of the original house that were required to be maintained, all treated to create a feeling of openness across the ground floor.

Pale timber panelling and white wall finishes work with flexible layouts, intended to increase the ability for "opening up" or "shutting down" the home from its courtyards. Pale curtains in the glazed walkway offer a looser way of enclosing the space.

Matt Gibson Architecture + Design has previously completed several conversions of heritage properties in Australia, including a redbrick extension with glazed undercroft in Melbourne.