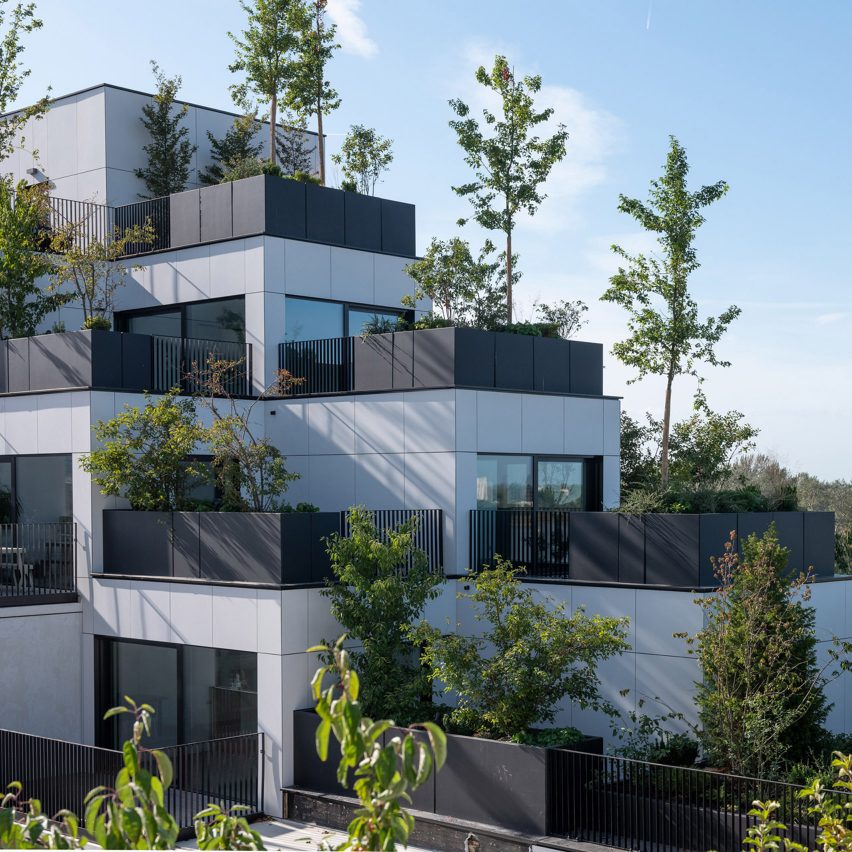 More than 1,000 plants adorn the exterior of the Palazzo Verde housing that Italian studio Stefano Boeri Architetti has recently completed in Belgium.

The L-shaped residential block in Antwerp incorporates a total of 1,200 plants, 86 trees and 1,000 shrubs – equating to 780 square metres of greenery.

Palazzo Verde, which translates as Green Palace, was designed by Stefano Boeri Architetti as a green landmark for a wider masterplan in the city called Nieuw Zuid.

Nieuw Zuid, which is being overseen by local developer Triple Living, will include other apartment buildings by the likes of David Chipperfield and Shigeru Ban when complete.

"The client envisioned the project as a green spot, a green landmark for the Nieuw Zuid district," said the studio's founder Stefano Boeri.

The size and layout of Palazzo Verde were dictated by the masterplan, which was drawn up by the Italian firm Studio Associato Bernardo Secchi Paola Viganò.

All of the plants and trees used throughout the building are native species, chosen as "a continuation of the existing ecological context", according to project director Hana Narvaez.

"The studio performs a thorough site analysis, often with the guidance of our consultants, in this case, Laura Gatti, to ensure that the chosen species follow a set of parameters," Narvaez told Dezeen.

According to the studio, the aim of the greenery is to help improve local air quality and improve urban biodiversity in the area.

The chosen species also have a "reduced water consumption and need for maintenance" compared to other plant species, Narvaez added.

Stefano Boeri Architetti is best known for its buildings that integrate plants, since developing the Vertical Forest concept and building its first prototype in Milan in 2014.

The studio has since developed vertical forests for Eindhoven, Tirana and Egypt's New Administrative Capital, which will all use local plant species to suit the different climates.

"It all starts with the climate conditions observation and a consequent selection of species," Boeri told Dezeen.

"To us, greenery is not an ornamental element of the facade but a basic component of our architecture. We aim to create ecosystems that, in time, can self-regulate, grow and flourish," he continued.

Inside, the block comprises 67 apartments. Each one has access to a loggia or balcony, which breaks up the building's fibre cement and concrete facade.

The building's loggias, which are fronted by sliding glass and lined with wood, are intended as extensions of living spaces behind them.

Meanwhile, the balconies are intended "purely as outdoor spaces" and sit externally to the living spaces.

Each one is finished with white plaster walls and wooden flooring but some are sheltered while others are open to the elements.

The ground floor of the Palazzo Verde is lined with commercial units, including the Circularity Centre – a space containing tools for residents to repair bicycles and household items.

The housing is complete with three roof gardens, as well as a 2,000-square metre courtyard that links to a public amphitheatre.

Stefano Boeri Architetti was founded by Boeri in 2011. Its main office is in Milan but it also has studios in Shanghai and Tirana.

Alongside its vertical forests, the studio recently designed a new entrance and walkway at Rome's Domus Aurea and it is collaborating with Diller Scofidio + Renfro on the revival of Pirellino skyscraper in Milan.

Boeri was the curator of this year's Salone del Mobile fair. In an exclusive interview with Dezeen, he said his goal was to "demonstrate that Milan is alive" after the 2020 event was cancelled due to the pandemic.

The photography is by Paolo Rosselli courtesy of Stefano Boeri Architetti.