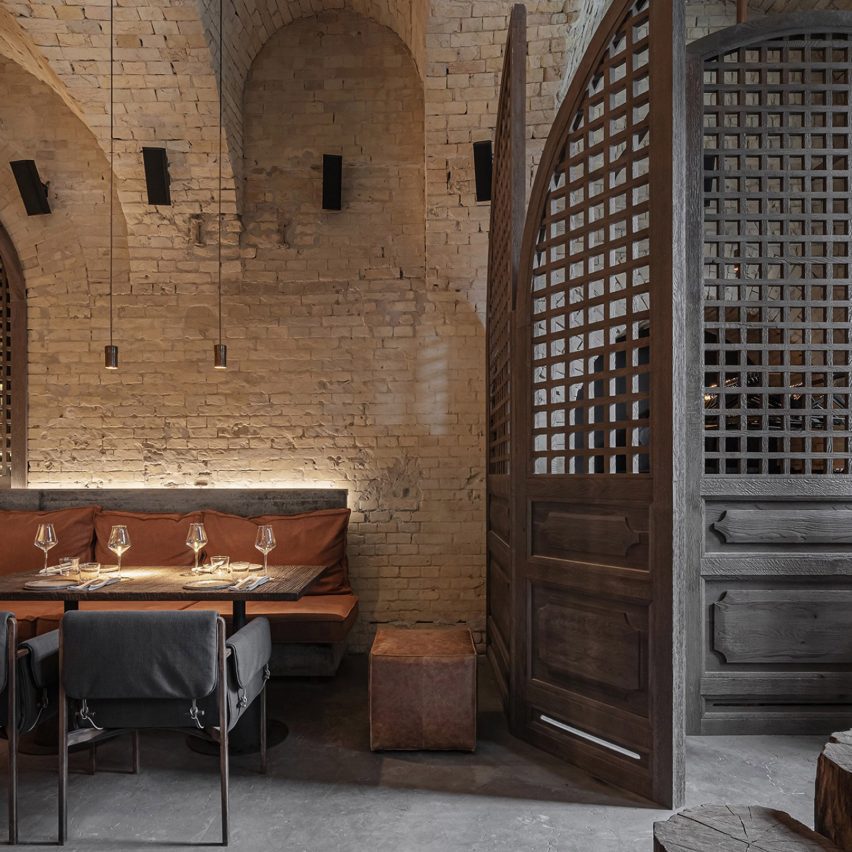 Restrooms housed within a red metal mesh structure and a central open kitchen feature in this Japanese restaurant in Kyiv by local architecture and design firm YODEZEEN.

Located in an 18th-century brick building with art nouveau elements, the Virgin Izakaya Bar is in a central area of the Ukrainian city that was previously dedicated to weapons production.

Izakaya refers to a type of informal bar serving drinks and small plates of food that are ubiquitous in Japan. The word izakaya (居酒屋) is made up of three kanji with the meaning: stay-drink-place.

YODEZEEN's design concept was based upon retaining the industrial building's existing architecture and all of its original art nouveau details, while creating a welcoming and contemporary design evocative of the izakaya experience.

Measuring 405 square metres, the Japanese restaurant's dining hall revolves around a central open kitchen that serves as the interior's focal point. Positioned at the same level as the restaurant's seating and spanning almost the entire length of the restaurant, the kitchen is edged with a long bar counter and designed to be visible from every angle.

Wooden tables are placed around the main hall, and some places have single stick stools reminiscent of those found in izakaya across Japan.

"Everything that used to be carefully hidden is now in the public realm," said the studio, which has offices in Kyiv, Los Angeles and Miami. "The guest finds himself face to face with the chef and becomes an attendee of a real culinary master class."

To add warmth to the bare brick walls and concrete surfaces, which the studio deliberately kept raw, the design team selected a palette of natural materials such as wood, copper and natural leather.

Oxidised metal panels and metal mesh were added to create zones within the interior and also create special decorative elements. This is demonstrated in the restaurant's restrooms, which are houses in an independent red metal mesh structure.

"We wanted the elements of the Japanese style not to be flashy, but to be read in certain solutions," said Artem Zverev, YODEZEEN studio co-founder and the project's lead architect.

"It is about the concept of restrooms, expressed in a separate building in Japanese style, about three metres high," Zverev added.

"We have implemented this interior building in the form of a red metal mesh, which made it possible to view a part of the hall from the restrooms and vice versa."

The Virgin Izakaya Bar has been shortlisted for restaurant and bar interior of the year at the 2021 Dezeen Awards.

Other projects nominated in the category include another restaurant in Kyiv with bumpy clay walls and rough concrete surface by local studio Yakusha Design,  and a restaurant with a lighting installation made up of a tangle of red neon tubes in Berlin.