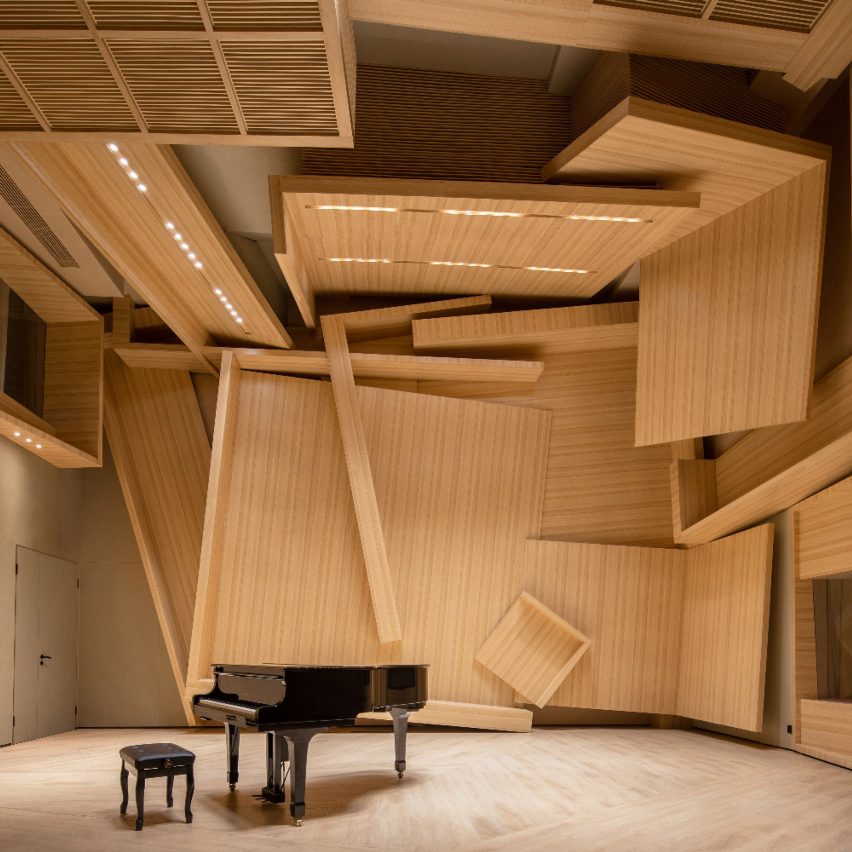 The Meilan Music Studio is located on the fourth floor of the opera house that was designed by Zaha Hadid Architects and opened in 2010 on a site in Guangzhou's central business district.

Domani Architectural Concepts was approached in 2017 to develop a design for the mixed-use studio complex, which is used for rehearsing and recording sessions by symphony and chamber orchestras, choirs and other musicians.

The music studio is arranged across two floors and comprises a large double-height performance space surrounded by several recording rooms and a workspace for music production, as well as relaxation areas and utility spaces.

"The spaces needed to be aesthetically creative, as well as refreshing the impression of the traditional music studio while fulfilling strict acoustic criteria," said Domani, which was shortlisted in the civic and cultural interior category of Dezeen Awards 2021 for the project.

The studio's walls and ceiling are covered with acoustic panels made from solid or slatted timber that are arranged in an apparently random configuration.

"We aimed to build a chaotic structure with an astonishing appearance that seemed to be randomly generated," the studio told Dezeen. "The design visualises the spontaneous part of the process of music composition or any kind of creative works."

The jumbled wooden elements incorporate lighting and built-in seating, as well as forming frames around openings that provide a visual connection between the central performance space and adjoining recording rooms, studios and breakout areas.

The key consideration for the studio space was to optimise acoustic conditions, so Domani collaborated with a specialist acoustics firm to refine the design and identify suitable materials.

"Due to the comprehensive requirements of the sound effect of the venue, special materials are used for the walls and floors to strengthen sound insulation, control the elasticity of sound waves and prevent moisture and static electricity," the architects explained.

"The irregularity of the space is designed through the combination of design techniques and material density, to avoid the interference of inner standing waves on the recording." A bespoke chair was designed for the project by furniture brand A&V, which is part of the Domani group and is headed by the firm's design director, Ann Yu.

The folded geometric form of the 6 Degrees Chair is made from simple section of wood. Like the music studio's interior, its colliding shapes are inspired by the creative process of musicians.

Prototypes featured in the spaces are splashed with ink that represents the need to continuously destroy and rebuild work as part of this unpredictable process.

Domani Architectural Concepts was established in 2005 and is owned by Domani Group Limited. It focuses on spatial design and related corporate planning, business consultancy and product development.

The Meilan Music Studio is shortlisted in the civic and cultural interior category of Dezeen Awards alongside a floating church on a canal boat in London, and a project undertaken by Kengo Kuma and Associates to renovate Antoni Gaudí's Casa Batlló in Barcelona.

The photography is by Vincent Wu.