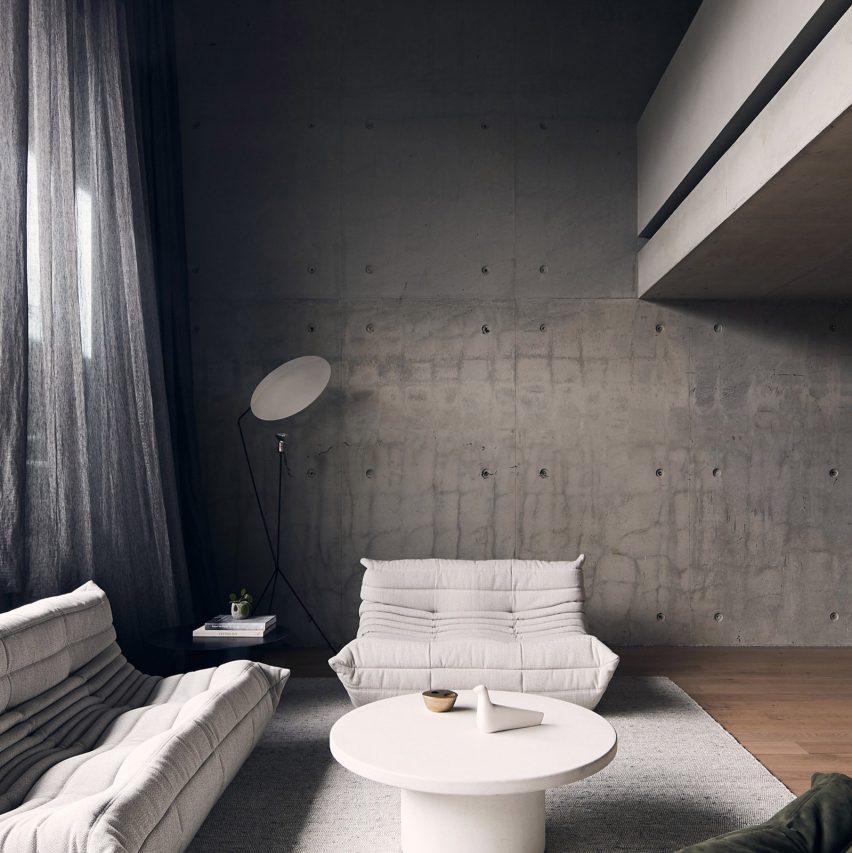 Hidden off-form concrete walls have come to the fore in this minimalist Melbourne apartment conversion, with interiors designed by local firm Studio Goss.

Located in the city's Clifton Hill suburb, Roseneath Street apartment is set on the ground level of a 1970s commercial building that has recently been adapted for residential use.

As the client purchased the apartment unit before it was converted, Studio Goss was able to be involved with the design process from the very beginning.

Heavily influenced by the building's brutalist exterior, the studio decided to strip back the cladding that was covering the walls and ceiling to reveal the off-form concrete shell beneath.

"The project proves that a bold concrete space need not be cold and uninviting," said the studio. "It embraces imperfection and texture."

The studio also lowered the floor by a metre and a half to form a voluminous double-height living area that remains out of view from the public footpath beyond the windows.

"Excavating the ground floor below the street level not only opened up more floor space, it created a sense of drama and scale in what was previously a generic apartment," said the studio, which was established by David Goss in 2014.

In keeping with the tonality of the concrete walls, the space has been lightly furnished with a couple of grey sofas and a moss-green armchair, all from the Togo collection by Ligne Roset.

A concertina glass door can be pushed back to open the living area up to a terrace, which houses a selection of tropical potted plants.

Should the inhabitants of Roseneath Street want more privacy, a gauzy ash-coloured curtain that spills down from the ceiling can be drawn across to obscure the view. 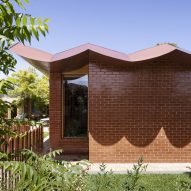 Towards the back of the ground level is the kitchen, which is anchored by a chunky concrete island. Concrete also lines the inside of a wall niche that accommodates the small stove.

The cabinetry and floorboards across the apartment are made from white oakwood, which the studio felt would "introduce a level of warmth and refined detail" to the otherwise grey interior.

A new concrete staircase that was poured in-situ leads up to a mezzanine, where a bedroom and bathroom are tucked behind an oak partition.

The Roseneath Street project has been shortlisted in the apartment interior category of the 2021 Dezeen Awards.

Other apartments in the running include a Guangzhou flat that's almost entirely lined with Douglas fir and a Haussmann-era Parisian apartment with an undulating timber wall.

Photography is by Willem-Dirk du Toit.