This tiny laser device can replace every single measuring tool you use… and it’s on 20% discount!
Home  ›  Information

This tiny laser device can replace every single measuring tool you use… and it’s on 20% discount!


Architecture, engineering, designing – all these professions are often associated with ‘building the future’. Yet they rely on tools and instruments from over a century ago to get the job done.

Meet MEAZOR, a Good Design Award-winning state-of-the-art measuring tool that can compute distances, scan floor plans, calculate angles, convert measurements between imperial and metric systems, and can even scale up or down your measurements. In short, this tiny device replaces your measuring tape, laser measuring gun, spirit-level, protractor, and even your scale/ruler… and it’s about as small as a burner phone. 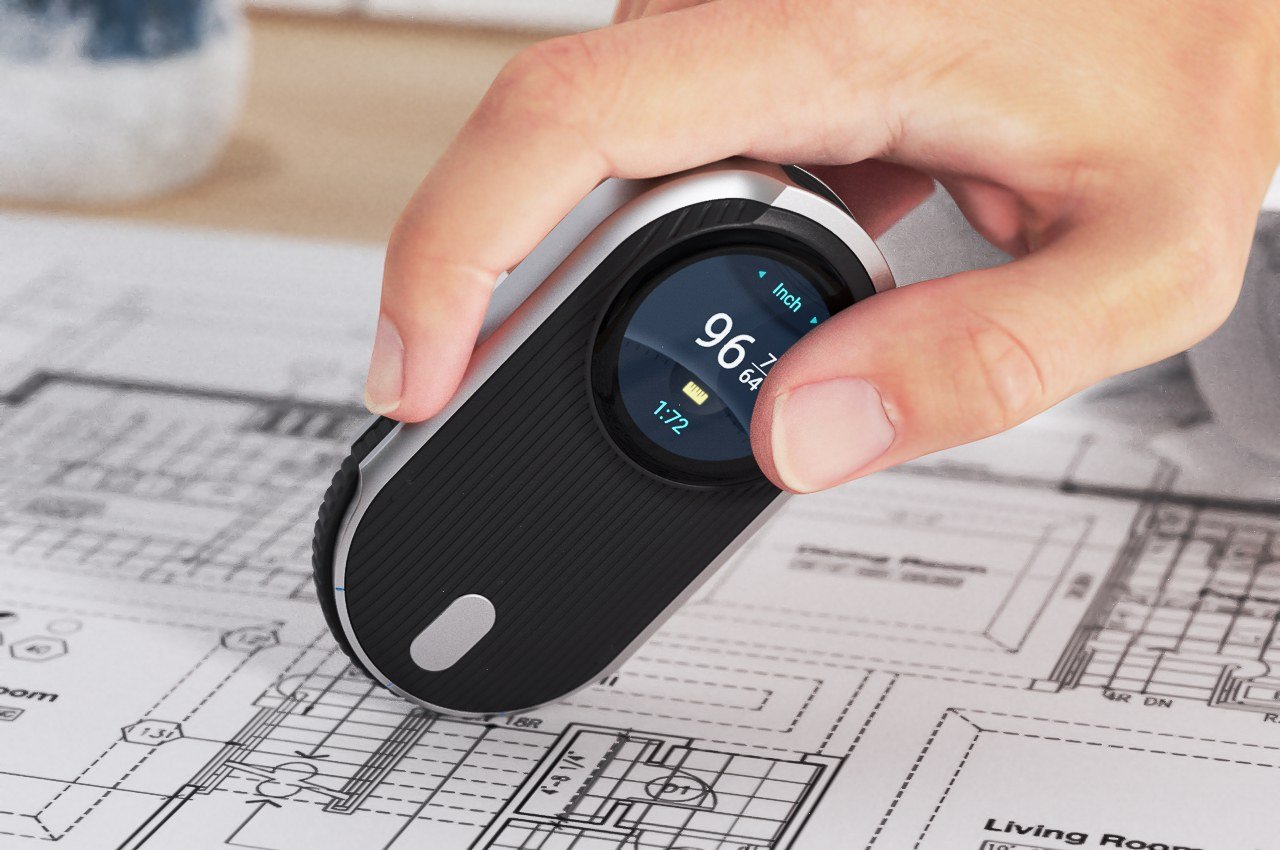 A recent recipient of the G-Mark (a symbol that represents the highest-caliber design and innovation), the tiny measuring device comes with a design and form factor that’s highly reminiscent of the rather iconic Motorola Aura from 2008. Its distinctly familiar design aside, the MEAZOR is an incredibly powerful measuring device, with an internal processor that’s capable of accurately creating floor plans, measuring small and large distances (even on curved paths), plotting contours, and saving all your metrics to your phone for you to deep-dive into later. 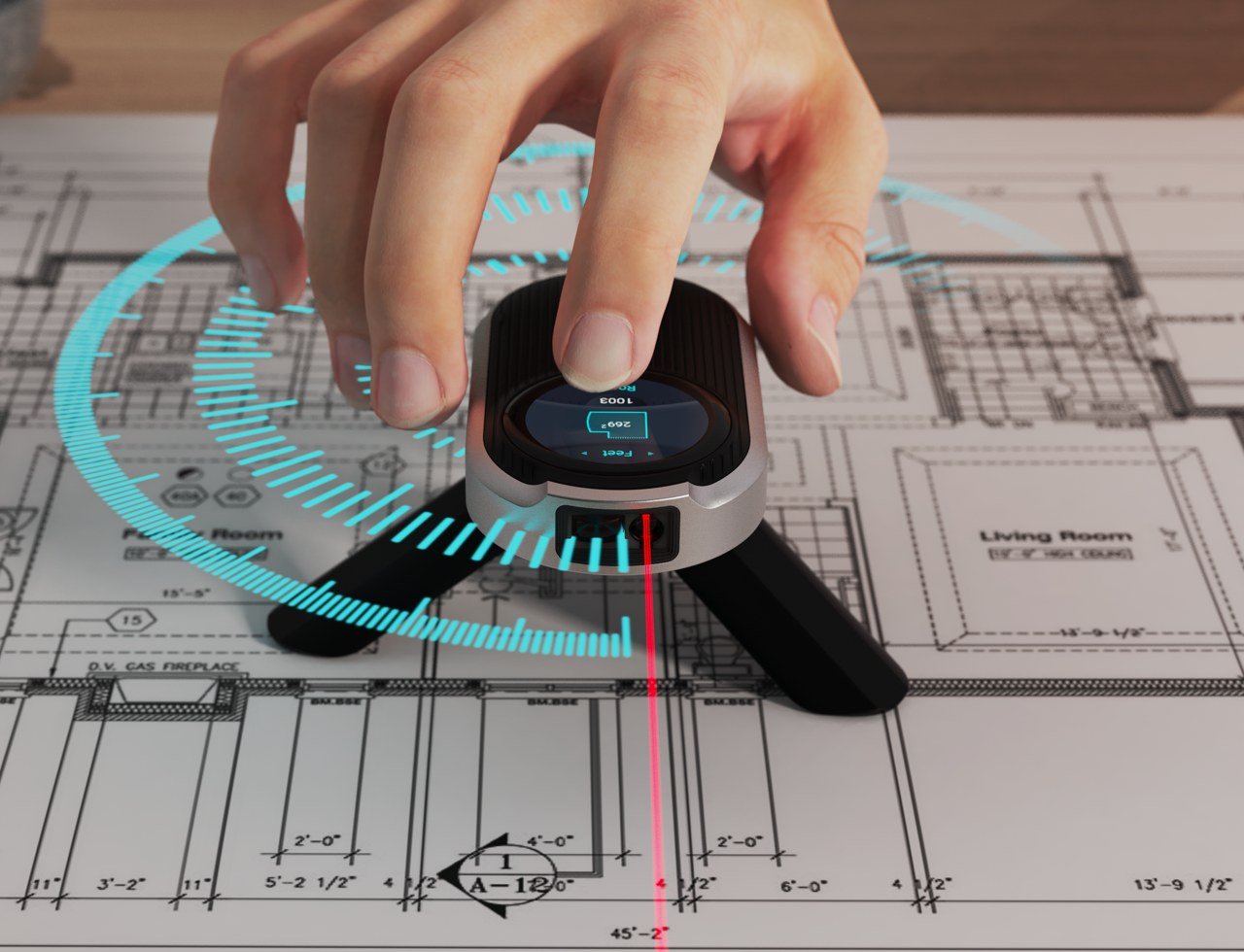 The curvy, ergonomic, handheld device sports a wheel on one side (that lets you measure distances by rolling on surfaces), and a laser gauge on the other side (working as an accurate 2D scanner and laser measurer). Sitting between them is a circular multi-touch display, and a single button interface that allows you to measure distances, save the metrics, and share them to your phone. Once the measurement/profile/2D-scan makes its way to your smartphone, you can edit them, update them, convert metrics, and even share orthographic and plan drawings in popular formats. An age-old process that requires tapes, spirit levels, rolls of blueprint paper, and infinite amounts of patience, gets reduced to a job that can take mere seconds, effectively propelling your archaic measuring techniques rightfully into the future.

2D Floor Plan Scanning – From Capture to Cadaster in a Flash 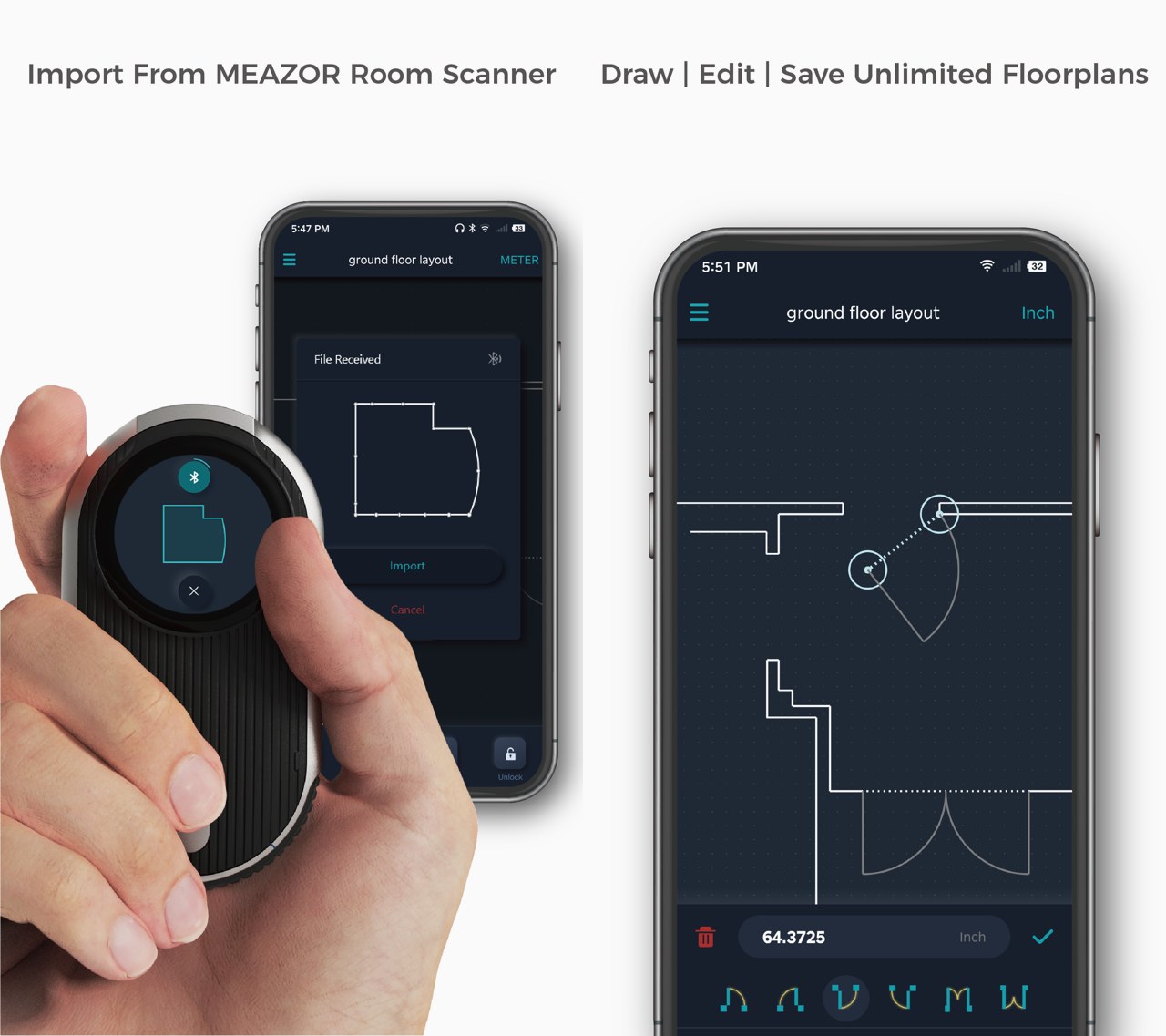 The MEAZOR is an incredibly advanced gadget on its own, but it’s taken to the absolute next level when you pair it with the smartphone app. On its own, the MEAZOR can accurately measure small distances as well as large ones. For smaller distances, the rolling wheel lets you measure simply by rolling along any given line – straight or curved. The laser lets you easily measure large distances. You can either use it as you would a laser gun, pointing from one wall to another to calculate the distances between the two, or just attaching the MEAZOR to a tripod and swiveling it 360° to generate an accurate floor plan of a room in just seconds.

You can switch between metric and imperial units right within the MEAZOR device, and even program it to scale up or down your measurements by any factor. MEAZOR records your measurements on the device, saving them as units as well as 2D plans. You can share these plans directly with devices using Bluetooth, or better still, bring them up in the MEAZOR app on your smartphone to perform CAD-level editing on them right from your mobile app. The MEAZOR app combines the device’s advanced measuring capabilities with your smartphone’s incredible computing power. Floor plans are saved to the phone as vector data that can be drawn on, edited, or updated. Floor plans can easily be populated with windows, doors, stair details, wall thicknesses right within your smartphone – this would require a computer running expensive CAD software a few years back. Once edited, vectors and 2D maps can be exported and shared with clients, collaborators, or contractors. 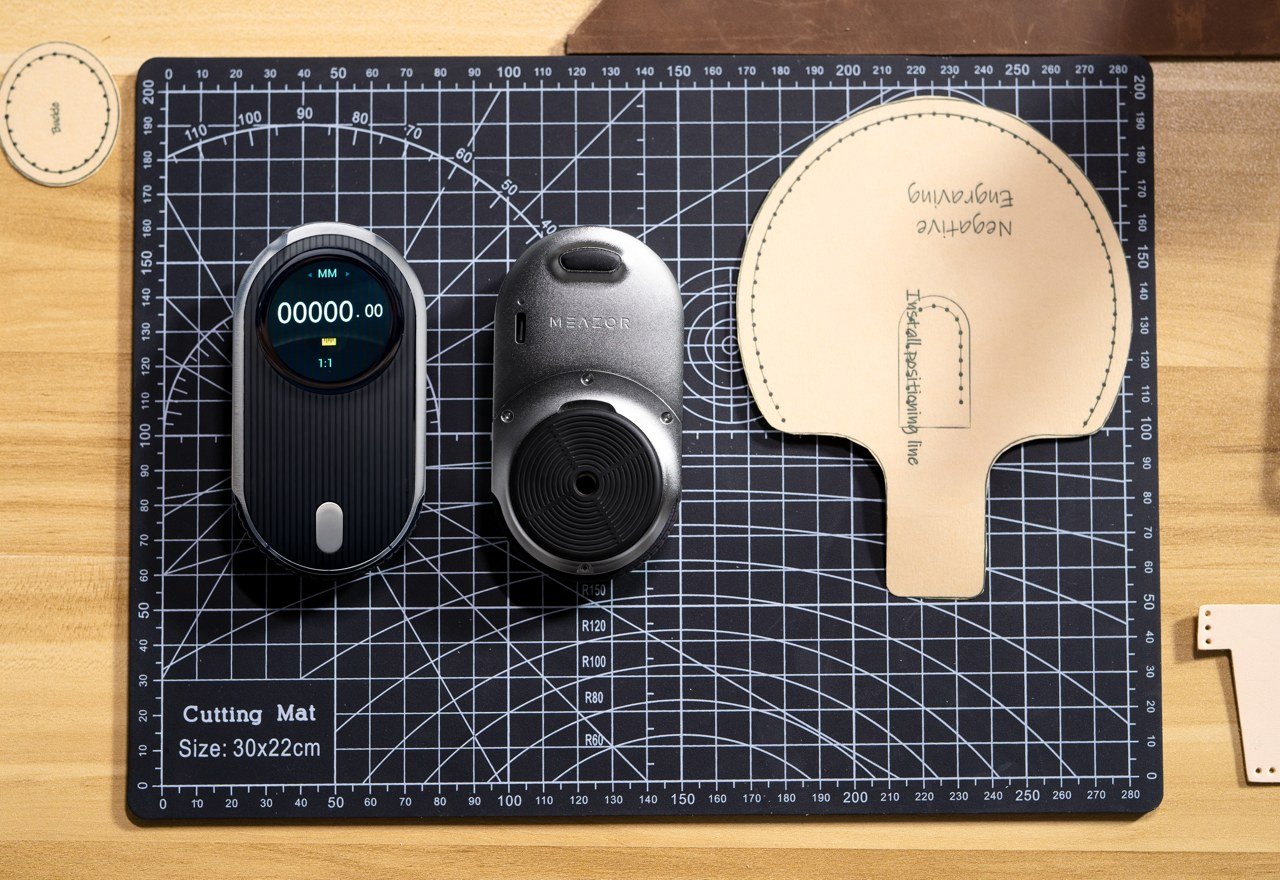 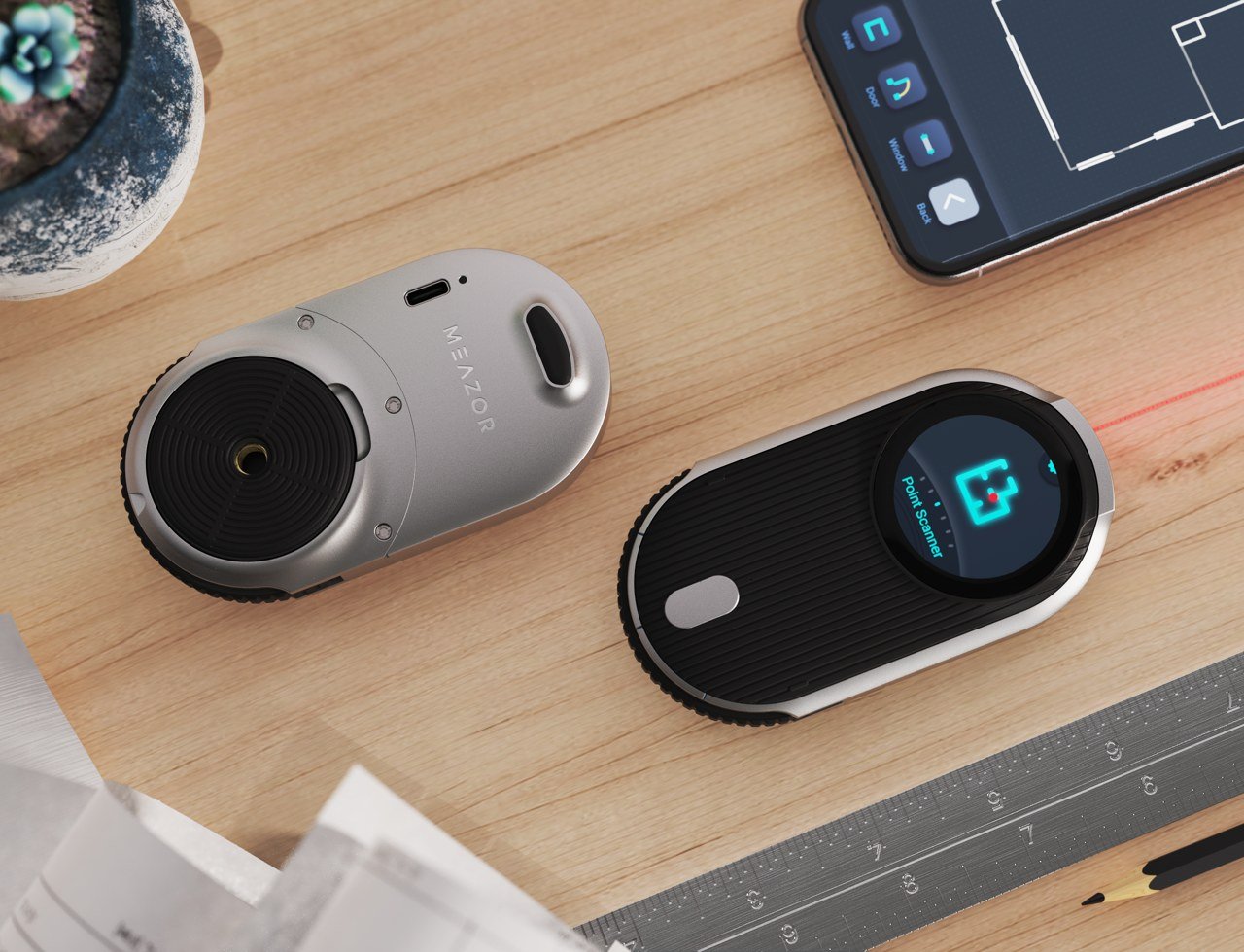 At less than 4 inches in length, the MEAZOR is the smallest laser room scanner currently available. Given its size, it’s impressive how it even replaces practically every measuring tool from a protractor to an inch tape. Even its laser measuring gauge is accurate up to 82 feet (25 meters). On the inside, a STM32 microprocessor handles all the heavy lifting, while the MEAZOR’s battery itself has a 30-day standby time. 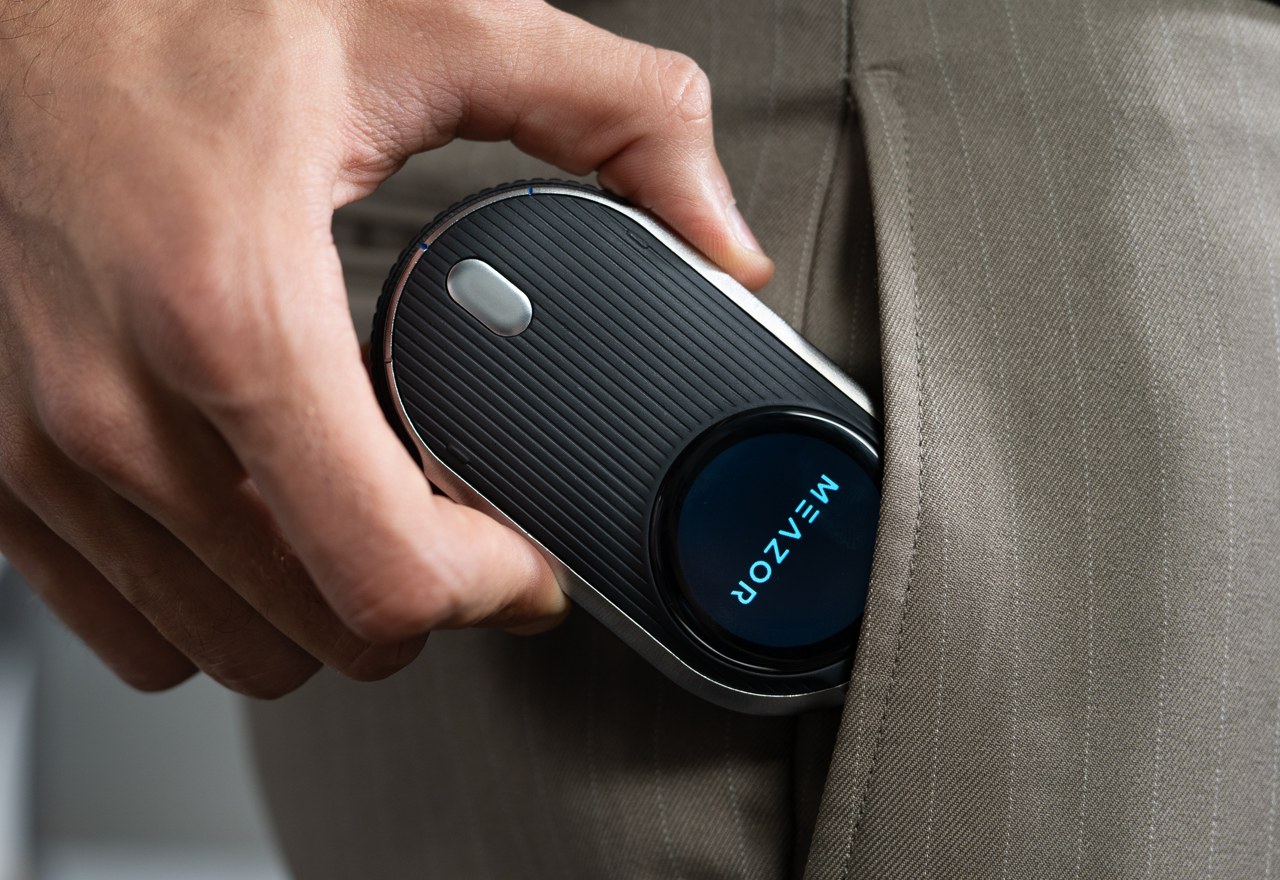 The MEAZOR device ships with a Type-C charging cable, a mini-tripod (for room scans), and a small screwdriver that lets you open up and replace parts down the line. The MEAZOR device is priced at $199, but is currently running a 20% discount for YD readers, bringing the price down to $159. The device is up for pre-order, and the 20% discount coupon code [MEAZOR20] is available across the website, applicable on the device as well as the accessories too, which include items like replacement parts, a soft-rubber protective cover, or pro-bundle accessories like an aluminum tripod, a 32-inch extension bar, and a soft-shell EVA pouch to carry the MEAZOR and its accessories along with you wherever you go.

The post This tiny laser device can replace every single measuring tool you use… and it’s on 20% discount! first appeared on Yanko Design.