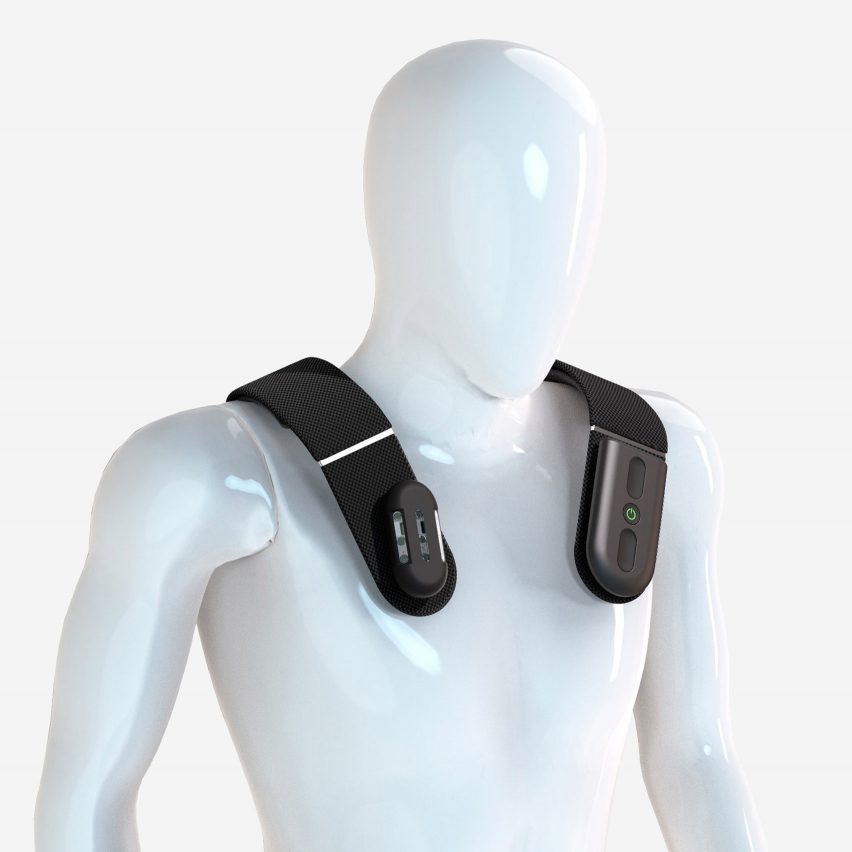 Called Biped.ai, the wearable technology has a minimalist design, with in-built 3D cameras that can be paired with headphones or Bluetooth earphones to warn users about the position of obstacles around them.

"The vest sits on the shoulders, and thanks to its 3D cameras, can detect and predict the trajectories of all surrounding elements, a few seconds in advance, just like an autonomous vehicle," Biped cofounder Mael Fabien told Dezeen.

"It generates 3D audio feedback to warn the users about the position of the important elements around them," he continued.

While working in an ophthalmic hospital in Lausanne, Fabien noticed that many blind and visually impaired patients sought alternative aids to traditional sticks and guide dogs.

"Starting to walk with a device that is ergonomic and intuitive brings confidence and eases acceptance of the other solutions too," he said. "It's a good complement during mobility training."

Fabien came up with the idea for the Biped.ai device with his business partner Bruno Vollmer, during the International Create Challenge hackathon in Switzerland.

"Inspired by autonomous vehicles, it integrates the latest advances of research and industry," Fabian explained. "It will allow you to safely and intuitively navigate in your daily life."

Together, they devised a software called Copilot that draws on the technology used in autonomous vehicles for the harness.

3D cameras detect, track and monitor the movement of surrounding objects in a 170-degree field of view around the wearer. The software can predict the trajectory of an obstacle a few seconds in advance, helping the wearer avoid accidents or collisions. 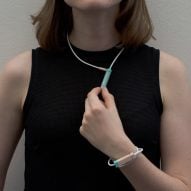 Maptic is a wearable navigation system for visually impaired people

It can identify more than 10 types of objects but only filters the important oncoming objects. For example, it will alert the wearer if it detects a dangerous obstacle such as a bike 12 metres ahead, but ignore an object that is nearer that it decides has no collision risk.

The device then filters the relevant oncoming information and warns the wearer via "spatial sounds" – sounds which appear similar to the real version of the sound.

It is fitted with a removable battery that lasts for over six hours, meaning that a wearer can use it for the majority of their day. It can also connect to the GPS on a smartphone and give navigation instructions to the wearer through audio cues.

Biped.ai is also designed to also work at night and in dark locations, as the obstacle avoidance software relies on high-quality infrared cameras that work in any condition.

The device will be available in Europe from September 2022. The brand is creating the harness in a small and a large option, which will work for anyone over 1.5 metres tall.

Other launches at CES 2022 include the iX Flow concept car by BMW, which changes colour from black to white to match the driver's mood and conserve electricity.

South Korean car company Hyundai also revealed its concept for a system called the Mobility of Things, which could turn inanimate objects into robots.

The Consumer Electronics Show is taking place in person in Las Vegas for the first time since the start of the pandemic until 7 January 2022. See Dezeen Events Guide for an up-to-date list of architecture and design events taking place around the world.