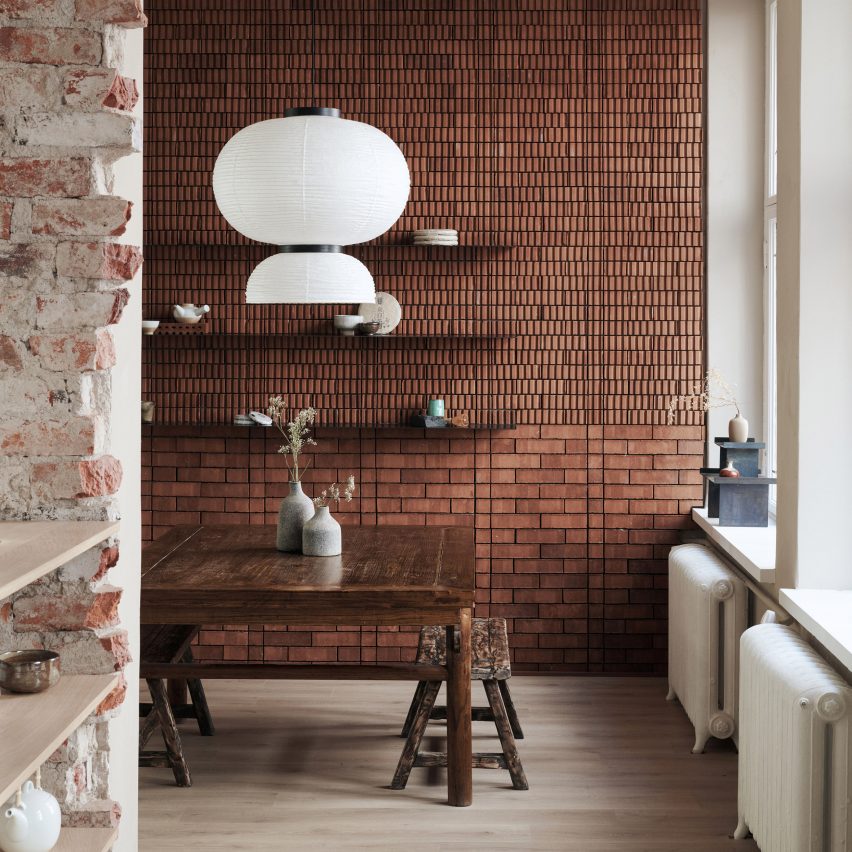 Design studio Yatofu has refined the interiors of a teahouse in downtown Helsinki with elements of brick, oak and oxidised steel.

The Teemaa cafe, which serves traditional Chinese and Japanese teas without artificial additives, was renovated to reflect both the craft of the brewing process as well as the raw tactile quality of the tea leaves themselves.

"A grounded palette of honest and textural materials was extracted from those used in the process of tea making," explained Yatofu.

"These were reinterpreted into a contemporary space through the use of modern forms, with a focus on handmade qualities to create a visual dialogue that speaks to the markings of time and craftsmanship."

Visitors enter the teahouse via a retail area, where packaged teas are displayed on oxidised steel shelves suspended between live edge columns of oakwood.

Thick-cut blocks of oak also form the counter at the centre of the room, supported by a base made from grooved bricks.

On the other side of the teahouse is a light-filled seating area where visitors can relax with their hot drinks.

Oak was used here again to craft a series of chairs, stools and tabletops, as well as a long bench seat.

A gauzy white curtain screens off a tasting area towards the back of the room, where visitors can sample some of the brand's most unique tea flavours and learn about the art of tea making.

The space is anchored by a weathered wooden table, above which hangs a bulbous paper lantern. 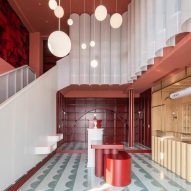 A textured feature wall is clad half in traditional flat bricks and half in the same grooved bricks that were used beneath the table in the retail area.

To cut back on waste, Yatofu calculated early on how many bricks would be required for these elements and sent any offcuts to be recycled.

Teemaa's final room accommodates a putty-coloured kitchen suite where drinks are prepared, while various paraphernalia including teapots and ornate Japanese-style teacups is presented on the surrounding walls.

All of the room's walls are rendered in beige plaster save for one corner, where a sliver of the building's time-worn structural shell has been left exposed.

The project was named small retail interior of the year at the 2021 Dezeen Awards, with judges praising it for being "playful, engaging and beautifully done".

The photography is by Aleksi Tikkala.